So, we need to add flipbooks on our website using jQuery solution? Ain’t that right! We assume, you already know the importance of flipbooks and hence you are looking for solutions. Let us with finding you alternatives and possibilities that could have otherwise missed out. At the end of this article, we hope you will have a much clearer mindset on which jQuery flipbook to use in your project.

Before we get into the list of plugins and solutions. Let’s do a quick talk about the jQuery flipbook or JavaScript version. We will keep it short and say, jQuery is just JavaScript made easier, yeah with some extra file load. But most of the projects have jQuery one way or another. So unless you are using all the plugins and codebase without jQuery then consider JavaScript-only plugin, else jQuery works without any issue, and is easier to use too.

There are plenty of jQuery flipbook plugins and solutions that you could use. We have also included some non-development versions like WordPress and full solutions that could work for your case too. You can have a look at that too if needed.

This one is arguably the best starred free jQuery flipbook plugin on GitHub with more than 5000+ stars. So, based on that, it is a remarkable plugin in itself. It supports HTML and images – that will cover your content part. But sadly it falls behind in today’s modern scenario where other competitions have direct PDF support and 3D implementations.

Version 3 is free to use but the newer version 4 requires licensing, as mentioned in the turnjs website. Remember that the plugin’s free version on GitHub – is not maintained for more than 7 years. So you are out of support and update with TurnJS. So we advise proper knowledge of jQuery and Javascript in case any bugs or customization is required. It’s left to your skills.

This premium jQuery flipbook is the best-rated jQuery flipbook plugin in CodeCanyon – rated 4.85 out of 5. It supports PDF and images. No HTML support – they reason saying that is difficult to manage HTML flipbook than PDF flipbooks and Image flipbook. And yeah a very realistic 3D flipbook and very much capable CSS flipbook too that’s comparable to Turnjs look, leaving the 3D aside. Premium does get you extra.

This is the current bestseller in CodeCanyon but it looks like another second runner up is coming for its position – listed below. Sold for more than 5000, makes it a reliable choice at what it’s capable of doing. It supports PDFs and images but is missing 3D since it was released almost 7 years ago. So it is a capable CSS flipbook jQuery solution. You also get a beta search feature with this plugin. Give the demo a try.

If you are not interested in modern features and happy with the CSS look and feel; WowBook can be an option. But other alternatives have almost these features plus extra features too.

This is a rather older and popular plugin in CodeCanyon. Along with it’s rather popular and best selling WordPress 3D flipbook, it has gained quite a lot of popularity with its 3D effect. It was the first 3D flipbook in CodeCanyon, that gave it a boost start from early one and is popular still in the market. It supports PDF and images to create PDF flipbook and image flipbooks. It has features like deep linking, lightbox, single and double-page mode and so on. To discover more visit the flipbook jquery item page on Codecanyon. 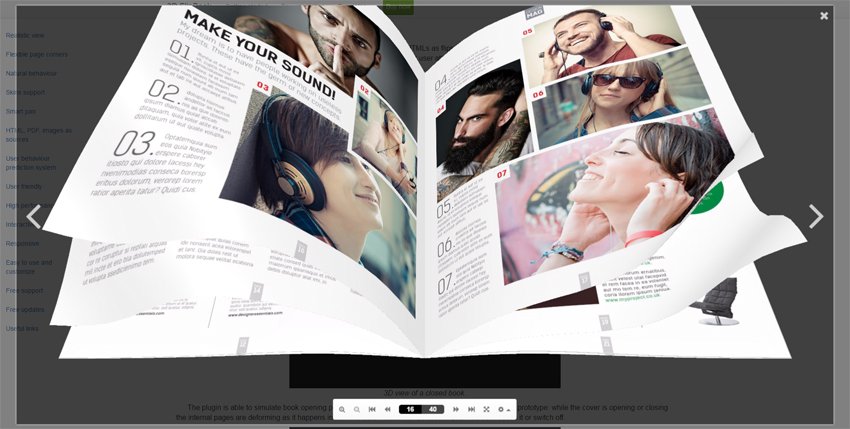 This is a newcomer in the Codecanyon market, but has impressive 3D effects and physics-based animation and flip effect. If you are a fan of real-life calculated flips then this could be interesting.  It uses iframes to display the flipbook which could be limiting or beneficial – depending on the use case. The plugin supports PDF, Images and HTML formats for creating Flipbook. But lacks a CSS fallback for older browsers, which is not much of an issue as the technology is fast-forwarding and most browsers have 3D support.

There are more flipbooks that are available in the market but are one way or another eclipsed by the current alternatives. Some of them deserve mention as they were prevailing in the market at a certain time period.

This plugin is one of the oldest flipbooks available in CodeCanyon. The Flash version of this flipbook was very popular before Flash was obsolete, and later an HTML only version of the Diamond flipbook was launched. This is based on turnjs and has integrated PDF support. So with this, you get Turn js and PDF support. But just those features are basic features in other advanced flipbook alternatives.

Another flipbook, that used to be a great alternative in CodeCanyon and was a jQuery version of a rather popular Responsive Flipbook for WordPress plugin. This too was overshadowed by new jquery flipbook plugins that have 3D effect and CSS based solution. The author of this plugin doesn’t support the plugin anymore and you are left on your own.  Also, the plugin is not updated since February 2016.

We have quite a few capable jQuery flipbooks that can create amazing flipbooks for your site. Most of them are easy to use and high performing flipbooks. You shouldn’t be wrong with any of these plugins and should serve the purpose.

Still, if you are looking for a 3D look we suggest dFlip or real3d flipbook, and also if CSS fallback is of importance than dFlip will be a solid choice in case some old browsers don’t support 3D and yet you require a beautiful CSS flipbook to serve the purpose. Though since the majority of browsers around 90% support modern WebGL, this should be a deal-breaker. But yeah CSS is certainly faster and less CPU intensive than 3D flipbook. So in that matter, turn.js and WowBook also join the game.